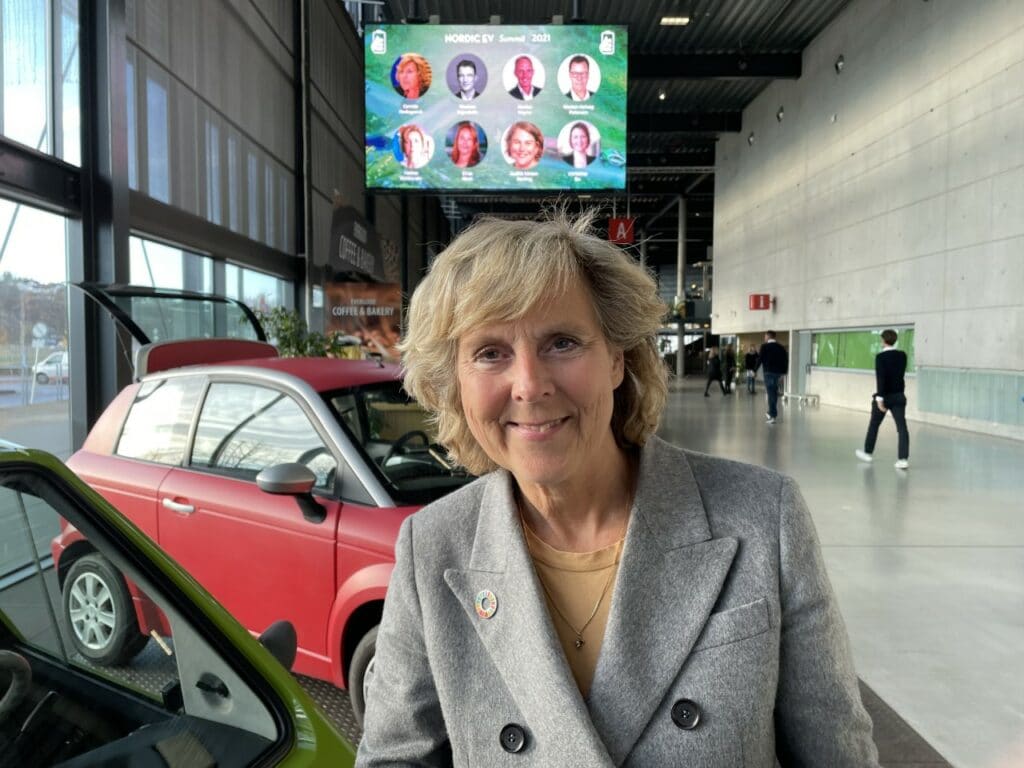 Former EU Climate Commissioner, Connie Hedegaard – Norway has paved the way for the rest of us

The former EU climate top believes we all have cause for deep concern about the climate crisis – but says Norway has done the world a great favor by setting the course for the electric car change.

Connie Hedegaard is not just anyone in environmental and climate issues. The 61-year-old Dane was already elected to the Danish Parliament for the Conservative People’s Party in 1984, then as the youngest member of parliament ever. In the 90s, however, she changed profession and became a profiled journalist and TV anchor.

But politics and environmental commitment pulled her back, and in 2004 she became Minister of the Environment in Danish PM Anders Fogh Rasmussen’s government.

In 2007, she became Minister of Climate and Energy, and chaired the UN’s major climate conference in Copenhagen in 2009 – before the following year she became the first ever EU Commissioner for Climate Issues, a role she held for the next four years.

– I believe Norway has done the world a great favor by showing that even in an elongated country with lots of mountains and a very cold climate, it is actually possible to switch to electric cars, quickly and on a large scale. CONNIE HEDEGAARD

At the end of last year, Connie Hedegaard visited Norway and the EV conference Nordic EV Summit, where she talked about what to expect after the UN climate conference in Glasgow, which took place parallel to the EV Summit in Lillestrøm, Oslo.

From the stage, she expressed deep concern, but still optimism about the possibilities of achieving the UN climate goals.

– Well, I’m very worried, everything is going too slowly, and I could give a long speech about everything going in the wrong direction. But at the same time, we must not forget that right now there are many positive things happening in many areas, Connie Hedegaard elaborates when elbil.no meets her after her keynote speech.

Not least in the transport sector, where the former climate commissioner believes that there has been a change of attitude around electrification that extends all the way from the authorities to the car industry – and which is now gaining a firm foothold among ordinary European consumers.

– A lot has happened here in just five or six years, Hedegaard says.

Do you think that the average European contributes to the fight against the climate crisis if he or she replaces the fossil car with an electric car?

– Yes. Every action counts! The choices we make as consumers are considered and have consequences for those who produce the goods we buy.

Hedegaard draws parallels to what has happened to our eating habits in recent years, where more and more people have become aware that meat consumption must go down for the sake of the climate and some are beginning to take the consequences of it.

– And suddenly the leaders of the Danish meat industry were in the media and stated: ‘Now we will become climate neutral’. Then the journalists asked why this comes only now, and not already when the climate consequences of meat consumption were documented. The answer they received was: ‘But then no one demanded that we were climate neutral, it is now.’

– We must never underestimate the power we have as consumers, Hedegaard states.

– What science tells us, and so far, they have been right, is that we have a maximum of 10 years to turn the climate emissions curve around. If we do not succeed, we have only some very ugly future scenarios left to offer future generations. CONNIE HEDEGAARD

How concerned should we be in the north for climate change?

– Very worried, we should all be. We saw it concretely this summer, when 182 people drowned in floods in the heart of Europe. And this happened in well-structured Germany. Who would have thought that such a thing could happen so soon?

Hedegaard believes that more and more of us now are realizing that climate change is real – and that it has already begun to take effect.

– Now it’s about to become real. By now one rarely hears anyone questioning about whether the changes are taking place or whether they are man-made. People realize that what scientists have been saying for 10-15-20 years is exactly what has started to happen now.

And that is why politicians with power must get the steam going, Hedegaard believes.

– What science tells us, and so far, they have been right, is that we have a maximum of 10 years to turn the climate emissions curve around. If we do not succeed, we have only some very ugly future scenarios left to offer future generations.

– All actors realize that change is needed by now if they are to retain competitiveness and jobs.

Do you agree that it seems that even the car industry has taken this message upon itself now, and that it is no longer as much an opponent of climate measures as before?

– I Agree. Even the big car manufacturers have realized that they need to change. Even those who have been sitting on the fence for a long time are now investing many billions to scale up fast enough in the electrification process. So yes, it has dawned on them.

She believes Tesla’s success has also been important in opening their eyes.

– It happens in the US, it happens in Europe and it happens in China. China has 40 percent of the global car market, and they are really picking up speed, both in the passenger car market and in the bus market. All actors realize that change is needed by now if they are to retain competitiveness and jobs. Because if they do not change, there are many others who are ready to hijack the market shares from those who do not keep up.

Believes Norway has done the world a great favor

Hedegaard thus mentions Tesla and China as key drivers in the electrification process that is now underway in large parts of the world.

But what does she think about Norway’s role?

– Norway has paved the way for all of us. I believe Norway have done the world a great favor by showing that even in an elongated country with lots of mountains and a very cold climate, it is actually possible to switch to electric cars, quickly and on a large scale.

She believes that we here on the mountainous country, Norway, have thus dampened the natural skepticism people have for new technology.

– Norway’s example illustrates that the electric car revolution is not an adventure or a theoretical dream, but that electrification is fully feasible.

Hedegaard also believes that we in Norway have had so much time on us and are so far ahead of the rest of the world on the EV trail, that we also appear as proof that this is not a bluff, but actually works over time.

– When Norway now, after working with electrification of the road transport sector for well over ten years, had an electric car share in new car sales of 64 percent, it illustrates that people hear from their neighbor that this works, otherwise not many of you would switch to an electric car.

After resigning as the EU’s climate commissioner, Connie Hedegaard has stepped out of direct politics for the second time. She is now a board member of a number of different companies, institutions and foundations in Denmark and Europe, in addition to leading Concito, Denmark’s green think tank.

And yes, she is an electric car driver herself.

– I drive a ID.3. And I admit that I must plan the trip a little better than I had to before I became an EV driver, at least if I am going to drive far. But a little planning has rarely hurt anyone, Hedegaard states.

And adds, before she hurries on:

– When I’m out driving an electric car now, it’s really inspiring to be able to state that I almost every week discover new charging stations that have appeared along the roads since the last time.